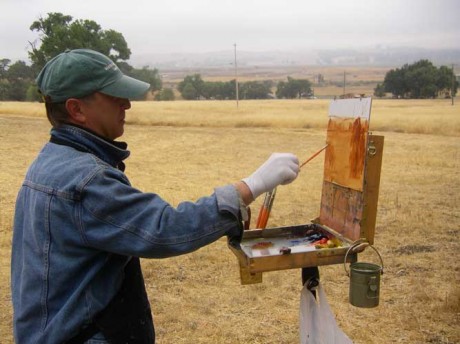 In 1974 Soltesz moved to Denver and enrolled in the Colorado Institute of Art. In 1976 he moved to the South Pacific to start a graphic design studio in Manila. His graphic design career took him to Hong Kong, Thailand, Japan, Australia, and Papua New Guinea. He returned to the United States in 1982 to continue his education and freelanced his way through the Academy of Art College in San Francisco where he majored in illustration and fine art. After four years of advanced classes at the Academy, he did commercial illustration for a number of years. In the early 90s, he discovered the early California landscape artist that changed his way of painting. J. Thomas Soltesz is an Artist Member of the California Art Club, a founding member of the BayWood Artists and has won numerous awards in Plein air competitions. He is currently represented by galleries in California. He teaches workshops and lectures on Plein air painting. He is also collected by corporations and individuals in the U.S. and abroad.